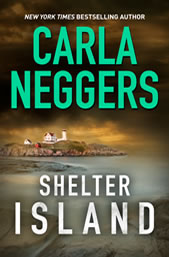 Boston doctor Antonia Winter has a feeling that someone is stalking her. What else would explain the threatening e-mails she’s received and the voice she occasionally hears whispering her name?

Thinking that someone sees her as a means of derailing the senatorial hopes of her boyfriend, Hank Callahan, Antonia leaves Boston for a secluded wildlife sanctuary off the Cape. But she has unwittingly placed herself in more danger: she’s been followed by the obsessed madman. Hank decides to go after Antonia to bring her back before a looming hurricane hits the little island.

With no power and no way back to the mainland, the deranged stalker is sure that either he’ll kill them – or the hurricane will.

*In print and audio as a bonus story in the 2016 paperback, eBook and audio reissue of COLD RIDGE. Originally published in ON THE EDGE, an anthology now hard to find in print.