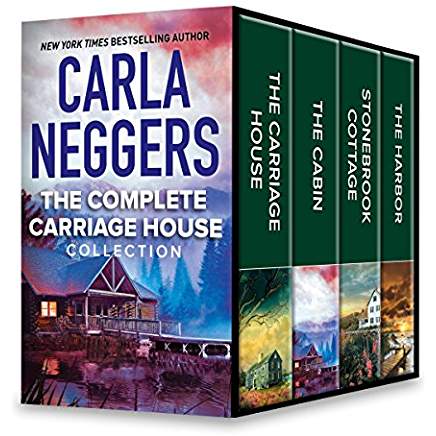 Fun and a little work is all Tess Haviland has in mind for a simple weekend project on a run-down nineteenth-century carriage house on Boston’s North Shore. But when Tess discovers a human skeleton in the dirt cellar, she begins to ask questions about the history of the house, the untimely death of the neighbor’s wife…and the sudden disappearance of the carriage house’s owner. Questions a desperate killer wants to silence before the truth reveals that someone got away with murder.

When her marriage hits a rough patch, Susanna Galway packs up her daughters and heads to a cabin in the Adirondacks for a break. Her husband, Texas Ranger Jack Galway, believes she still loves him, so when they’re gone longer than expected, Jack goes to get his family back. Little does Susanna know she’s also been followed by a killer obsessed with revenge who has sights set on her family. Trapped in the mountains, Jack and Susanna must find strength in each other if they hope to keep their family together and escape the cabin alive.

When the children of her best friend show up at Kara Galway’s home, they are terrified…and hiding something. Afraid for themselves and their mother—who is the governor of Connecticut—they are certain the circumstances of the previous governor’s death are suspicious. Kara must return to Stonebrook Cottage to unravel what exactly is going on. Are the children really in danger? What secret is her friend hiding? Kara must uncover the truth if she is going to protect the people she loves.

Still struggling after her father’s murder, Zoe West realizes only one thing will repair the damage—returning home to Goose Harbor, Maine, to confront the past. FBI special agent J. B. McGrath believes a killer is still on the loose—a killer who isn’t happy to see Zoe return. Zoe isn’t sure she can trust the unpredictable FBI agent, or her growing attraction to him. But the danger mounts, and one wrong move could destroy everything she and J.B. care about. Someone got away with murder and is determined to keep it that way.